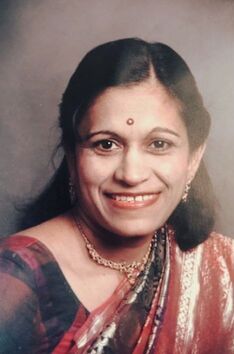 Savita was a beloved wife, mother, grandmother, and friend. She was born on March 21, 1947 in the small village of Talod, India. She was only able to complete her education to grade 9 as she was forced to drop out of school because no other girls were attending high school. She immigrated to Canada in 1975 with her young daughter to join her husband, Jitendra, who had immigrated to Canada the year before. Once arriving in Canada, Savita enrolled in evening English. While raising their three daughters, Paresha, Monica, and Melissa, she and her husband began volunteering within many communities and organizations as their way of giving back and showing gratitude to the community. Over the years Savita gave countless hours of her time to various organizations. She worked tirelessly behind the scenes on many fundraising and charitable activities including the momentous formation of the Mahatma Gandhi Canadian Foundation for World Peace. She never expected any attention, applause, or recognition. This tireless dedication to service was one of the admirable qualities that through so many people to her.

Sadly, Savita was taken from us far too soon on January 21, 2007 at the age of 59 after an inspiring battle with pancreatic cancer. The Foundation would like to honour her contributions to the community with this award. The recipient of this award is one who exemplifies sweet as compassionate qualities and who selfless he contributes to their community with no expectation of accolades. If you know of someone who you believe is deserving of this award please contact us to request an application. This person deserves to be recognized!

The award recipient will direct the Foundation to make a $300 donation to the charity of their choice as ratified by the Board of the Foundation.
Previous Recipients
2021
Jillian Fusco
Janine McCready